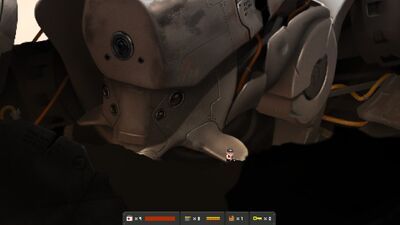 The Guardian is the answer to the First Visitation, and ostensibly meant to fight the oncoming Second Visitation, in The Final Station.

The Guardian is a giant bipedal machine that is designed to fight the effects of the Capsules and whatever is deploying them. Many citizens seem to place their trust wholesale in this Guardian, while a small minority seem to believe the Guardian itself is a scam, a cover up meant to give citizens a sense of false security.

It was built by The Blacksmith.

In the DLC, it's strongly suggested that Guardian was sabotaged by forces allied with the Invaders. The hero finds a missile with instructions to launch it in case "Guardian strays off course".